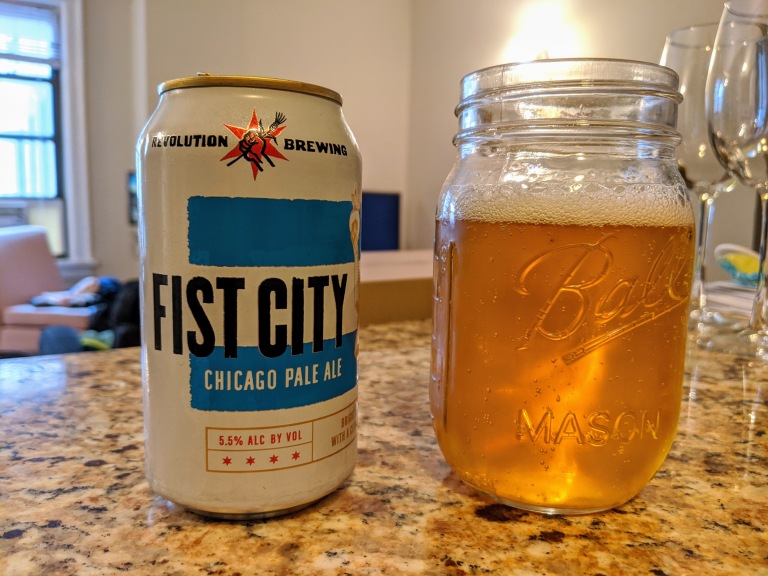 Naming a new style of beer is typically a bold PR gimmick, in my opinion. However, Revolution Brewing backs up their stake on a Chicago Pale Ale (copyrighted) in a way that sets it apart. Importantly, it’s a year round beer – this alone demonstrates its legitimacy as a style. If it can sell without the crutch of some holiday, then you know it can hold its own.

…And it does. Delightfully clear in a world increasingly obsessed with haze, Fist City is a no nonsense kind of pale ale – much like the city of its namesake. Bubbles dance upward in my mason jar (I know, I know…) and add to a steady head atop the golden liquid.

As a type of pale ale, it’s wonderfully balanced in both taste and smell. The malt backbone is strong and clean, perfectly supporting the bitter citrus flavors from its hops. It is incredibly easy to drink – perhaps dangerously so, as I look at how much I have left while I write. I’ll readily admit, this is the last one of the six pack I purchased. The others disappeared in just a few nights’ time.

Once it’s safer to go out, I’m incredibly excited to return to both Rev’s main taproom and their gastro-pub.

What do you think of making a new style of beer? Let us know of our social media or in the comments!