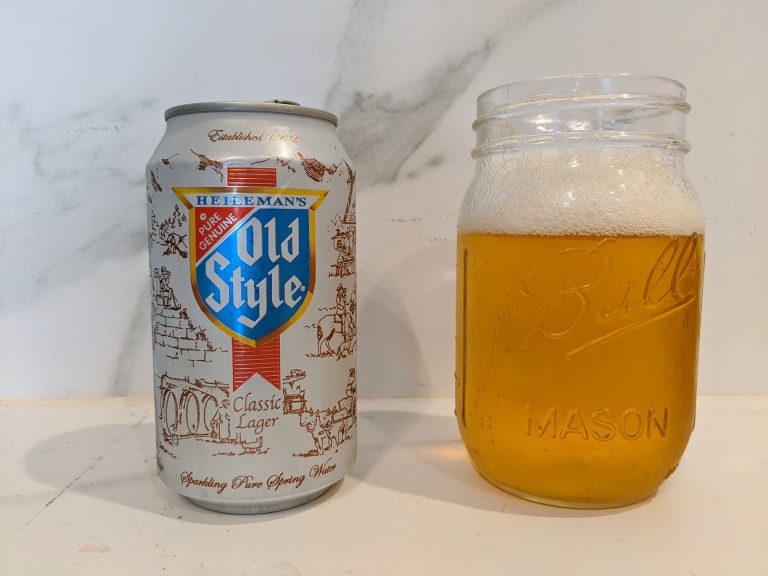 We’re just one week away from being able to crack open and sample my RedX and Saaz SMASH beer. Don’t worry, I’ll have the write up ready to go for that one. Until then, I figured I’d review one of the beers my buddy left on bottling day – a Chicago summer classic, Old Style.

After the wave of nostalgia crashes over, Old Style’s light, sweet scent hits the nose. If I were a betting man (I mean, I am), I’d wager that 80% of Old Style is consumed from the can or bottle. I chose to pour this one into a mason jar to admire its golden, crystal clear appearance. Condensation begins to form on the glass, making this summer staple feel even more appealing on this hot day.

I’ve been drinking a lot of “dad lagers” recently, as I explain in my interview with Marz’s Head Brewer Mikey Manning. Old Style might be the most “dad lager” of them all. It tastes like beer, how you imagine all beer tastes when you’re a child and ignorant to its varieties. It’s crisp and refreshing. The (I think) rice in the grain bill helps impart a really soft drinking experience – adding that quick, snappy break many lager drinkers seek.

This is the kind of beer my UK and German friends would make fun of Americans for, when I lived in London. For my next review, I promise I’ll get something different than a lager, though maybe not something nearly as adventurous as tepache.