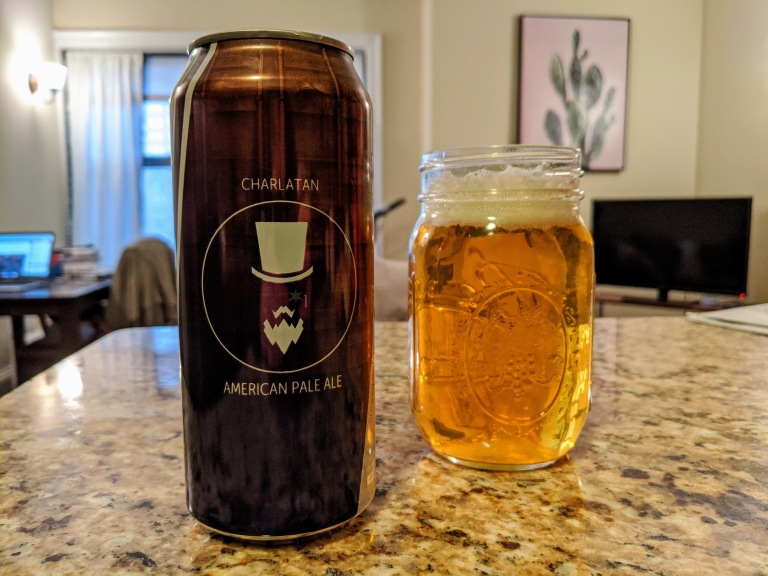 Every beer tells a story. Thinking beyond just the fields, the cultures, the water reservoirs, the brew days, and the distribution, beers themselves are echos of their creator’s creativity and personality. Some beers tell their stories, then cheekily ask if you believe them. Enter Maplewood’s Charlatan American Pale Ale.

Bought as a gift to shut me up during quarantine, I really enjoyed Charlatan. American Pale Ales are some of the best showcases for all the ingredients that go into beer. Getting it right requires a strong malt backbone with a sturdy, citrus-y hop profile to balance out the sweetness. It’s also one of the styles where I find water quality to be most obviously a factor – thankfully for our Charlatan, Chicago has some of the best water for brewing.

Okay so what is Charlatan hiding? What aligns it with its namesake? It certainly isn’t the hop profile. It balances the juicy, mouthwatering citrus notes of Citra and Centennial hops with an earthy pine from Simcoe hops. Any good American Pale Ale is going to have to walk this line.

How about the malt then? Nope. Again, Charlatan seems to stay well-within the tolerances of what a typical APA grain bill should be. There are some choices that I might not have gone with, such as white wheat malt – mostly due to my aversion to many beers with wheat in them -, but it’s still honest to the style. It’s robust, semi-sweet, and works well with the hops to make drinking this beer enjoyable.

Additionally, while its ABV is a bit higher than more APA, it’s still just on the higher end of acceptable for this style.

So what could it be then? I propose that the story of this beer, this particular Charlatan, is that by its name it claims to be something it’s not – despite actually being that thing. Calling itself a Charlatan when it clearly isn’t, is oddly what makes it a Charlatan.

A Charlatan in name alone is a Charlatan nonetheless.

I drank four of these as I wrote this. Whether or not you believe that’s the case is up to you, but perhaps this was the only appropriate way to review this beer.