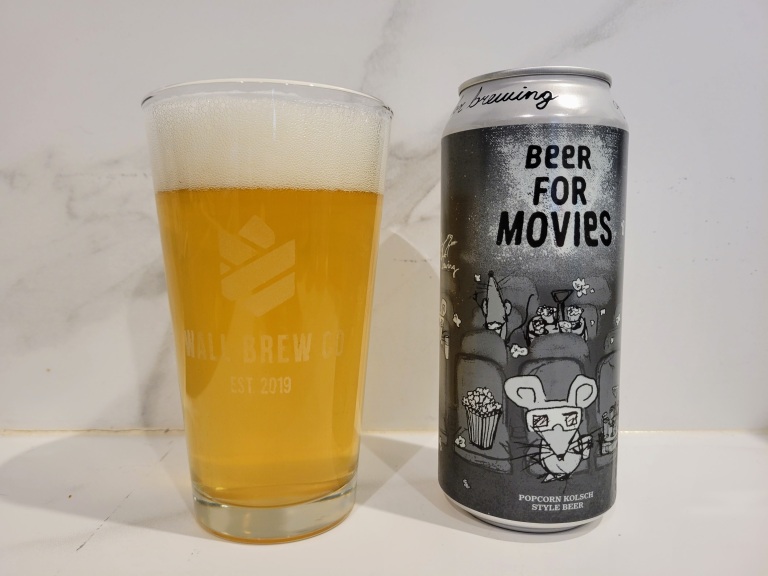 There is little more enjoyable in this world than watching your favorite movie – spare doing it with a beer as interesting as the film. In maybe one of the most impressive “Beer For…” series they’ve done, Off Color’s “Beer For Movies” is perfect for the silver screen.

Honestly, I didn’t have the highest hopes for this beer, but I’m pleasantly surprised. I’m not a huge fan of popcorn in general, and I was skeptical of how much it could truly add as an adjunct to a beer. Off Color chose the style correctly. Apparently, popcorn works really well with a kölsch.

This beer doesn’t look much different than any other kölsch, perhaps just a bit hazier. It has a light smell of a distant grain silo and just a bit of a sweet farmhouse funk. It reminds me of the way a friend describes his family farm where they grow corn, have an insane amount of farm cats, and also keep bees.

The taste, however, is where this beer really shines. The first half second of drinking it is unlike any range of flavors I’ve experienced before. Biscuit, then honey, followed by a distinct char of slightly-overdone popcorn, and capped off by the sweetness one expects from corn adjuncts. It is a velvety smooth journey.

I’ve always been a huge fan of the way Off Color has approached their entire business, and think that their “Beer For…” series is perhaps one of the cleverest ways of exploring new styles. In the end, beer is best consumed with doing something you love. I’ll continue reviewing this particular series in coming articles.

Overall, Beer for Movies is a tremendously delicious surprise for me this weekend. Go grab a four-banger if you can, and find your favorite movie for tonight. As for me, I’m grabbing another one and throwing Guy Ritchie’s Lock, Stock and Two Smoking Barrels on the TV.